The World block of Animation Avantgarde started of with the Mexican film Y. by Adrian Regnier Chavez, and The Fifth Wall by the Austrian duo Peter Kutin and Florian Kindlinger followed. Next were the French artist Boris Labbe’s Orogenesis  and the German collage The Hostel by Ulu Braun. The remaining four films were as excellently animated and thematically tight-knit as the first four – the Belgian one-man project EGO (2016) by Nicolas Provost (this time around playing with 2001: A Space Odyssey), Nighthawk by the Slovenian animation star Špela Čadez, VIS veteran David O’Reilly’s Everything, and French filmmaker Ondrej Svadlena’s Time Rodent. Out of these seven films, The Fifth Wall was given special attention, as it also opened the festival in its world premiere, and it is the focus of this article. 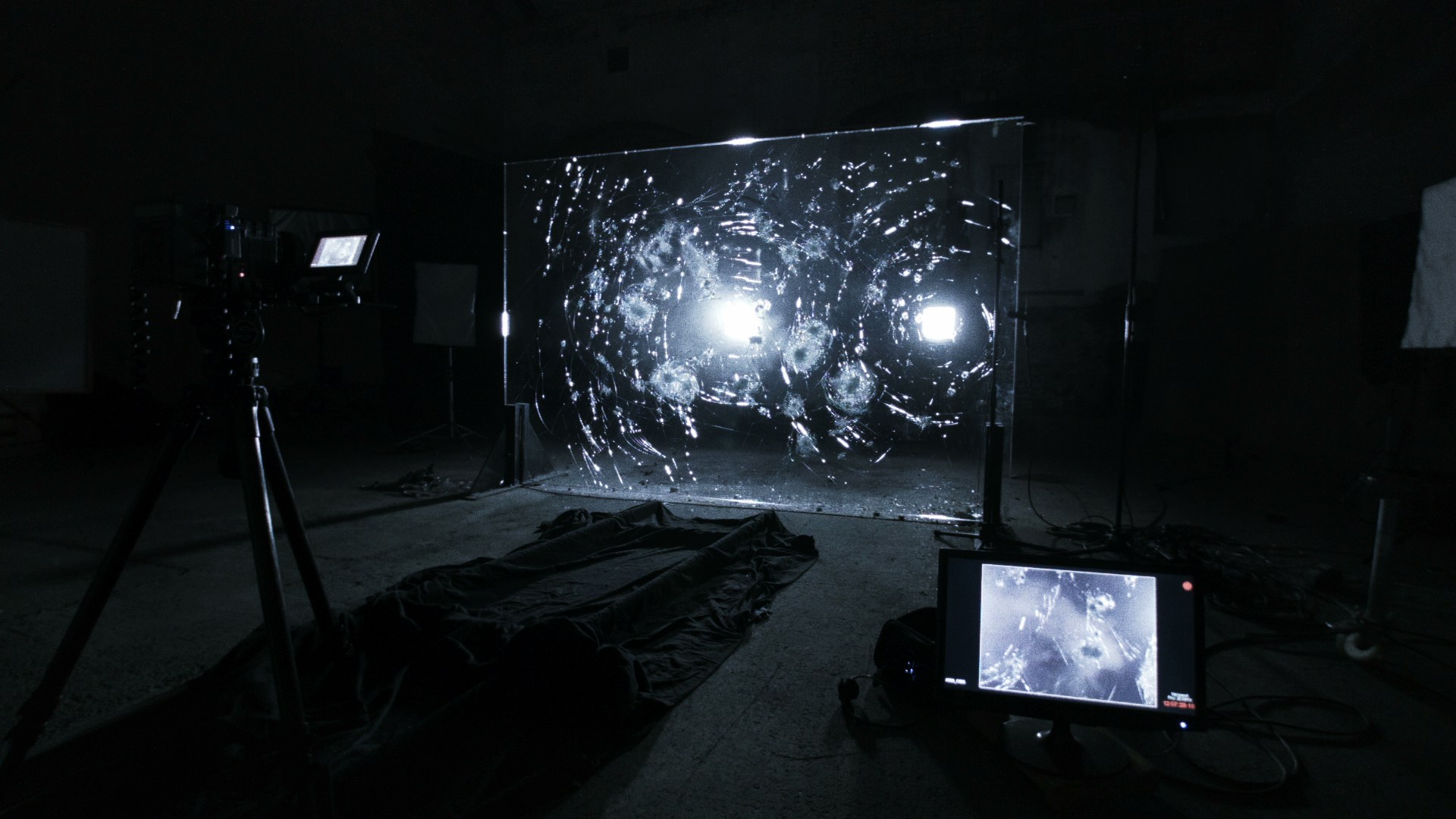 The Fifth Wall is a wall of tempered, but not exactly bulletproof glass in the middle of an empty, greyish room, probably a film studio. The wall is being shot at by an invisible sniper until the camera angle changes, when we see the glass resisting blows by a hammer. The camera then gets closer to the wall so that the cracked glass takes over the entire shot. A series of static images of delicately animated silver lines shows the wall’s transformation into an abstract and visually impressive collage of clefts and fractures. The film reaches its peak with an extended shot of an eye-shaped marking being engraved onto the glass by a blowtorch. A cold, mechanical female voice is commenting in a voice-over and her words materialize in a ghost-like fashion as narrative titles. She talks about film being taken for granted even though some people die filming. As it is, the film inspires at least three coherent interpretations, while the filmmakers proved to have had something else in mind – but were they really aware of what they have created? 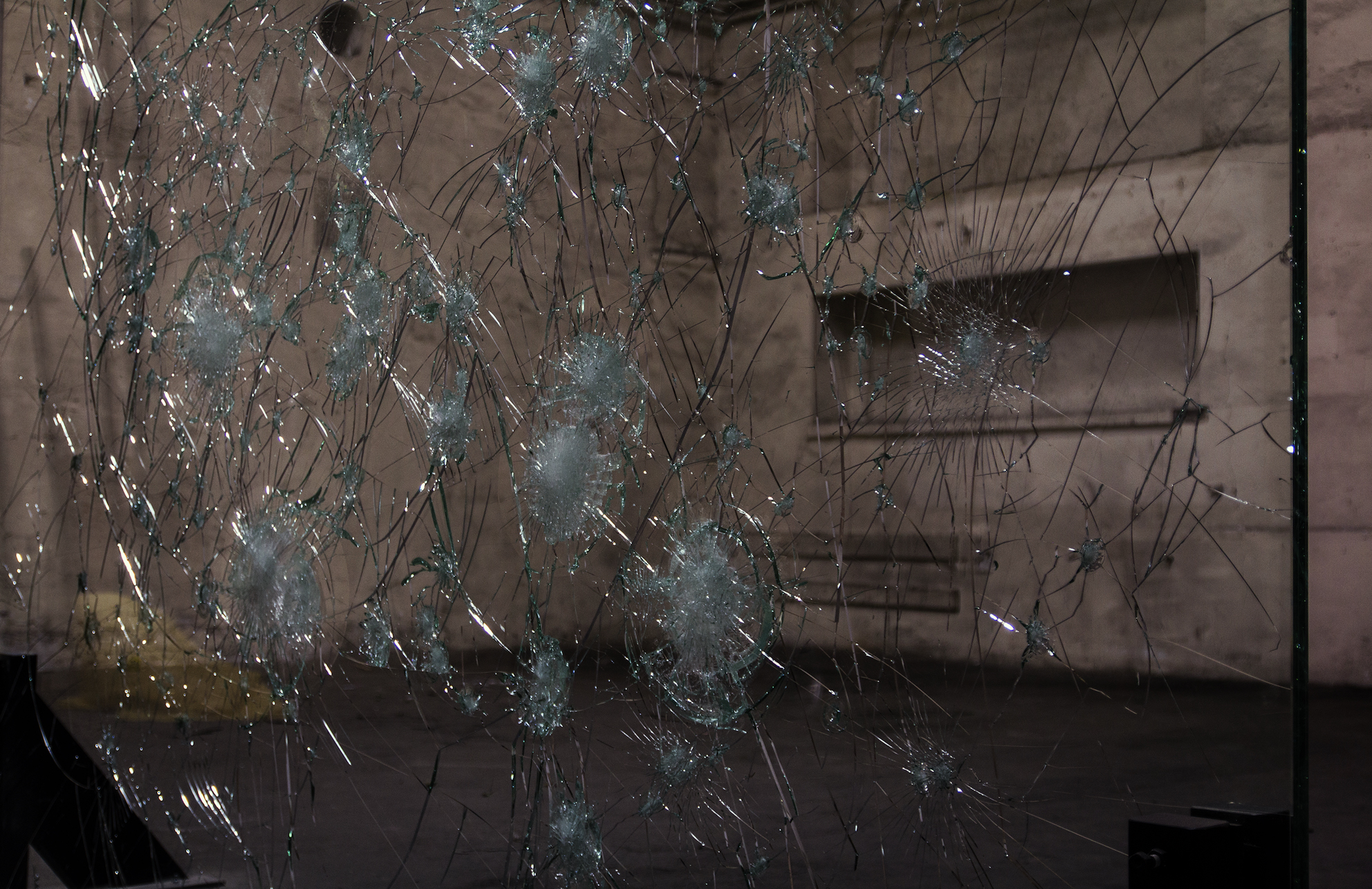 At the film’s second screening, Wiktoria Pelzer, head of the pre-selection and programming for Animation Avantgarde, moderated the Q&A with Peter Kutin and asked the first question ‒ How does the fifth wall relate to the breaking of the fourth wall in theatre? Kutin denied any connection to the theatre technique. The fourth wall is an invisible boundary between the audience and the play happening on stage, brought down by the actors freely coming up to the audience or even getting the audience to participate directly in the play. Kutin rejected the possibility of anything like that happening with his film. Strangely enough, the work is indeed an example of breaking the illusion, as small screens are placed in front of the wall and serve as meta-narrative comments – the audience is seeing a video about a bulletproof wall that has been recorded for this film. The fifth wall in cinema does not break, not literally in this film, nor as a plausible interpretation, because Kutin rejects it straight away and seems to miss the reference completely, instead focusing on the digital revolution as the theme behind the film’s idea. 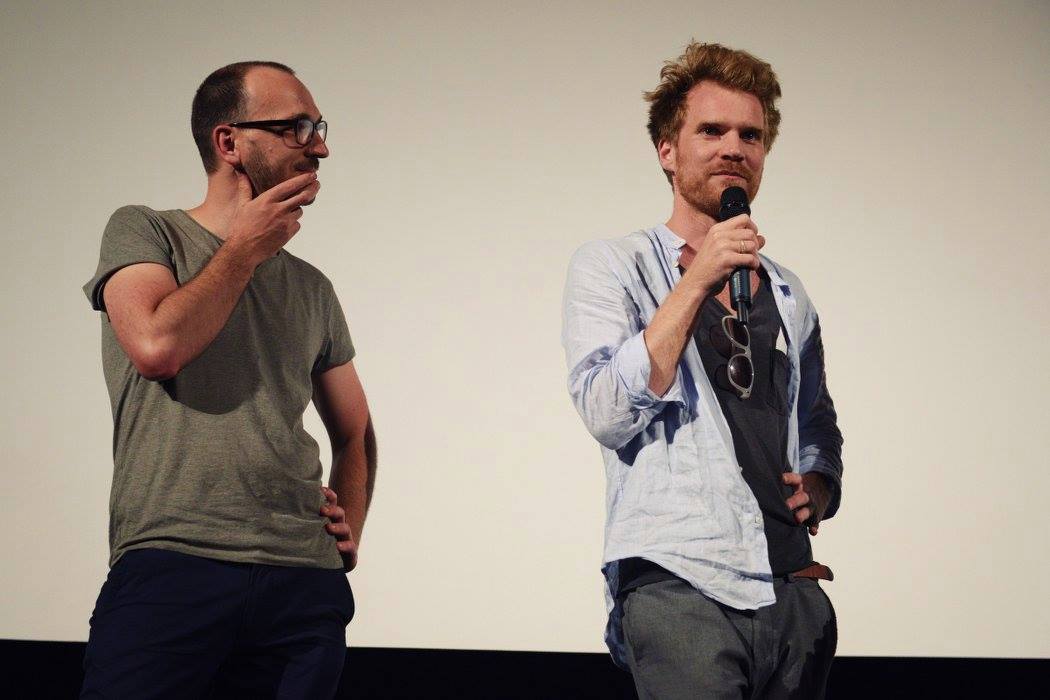 At the screening of the film at the VIS opening ceremony, which was hosted by Anna-Katharina Laggner, the host asked Kutin and Kindlinger if the symbolic wall in the film was meant not to break and should be left alone. This alludes to the invisible sniper listed in the ending credits as “Anonymous”, and also to the female voice-over talking about the threatening conditions of filming in today’s world. Laggner’s question suggests that the use of brute force to break something that exists only to not be broken is a metaphor of how contemporary society relies on physical force. The festival has repeatedly referred to the recent American hysteria over Trump’s fake news. Laggner connected the senseless use of force to the almost physical effort made by some media outlets, represented in The Fifth Wall by empty displays and ghost narrative titles, to twist the truth which is as solid as the tempered glass. But Kutin and Kindlinger both rejected that the film aimed to give any sort of answer to complicated issues.

The last reasonable interpretation mostly considers the audio-visual effect which has a strong impact on the viewer. They demand attention. Even with excellent animation, this is not so easy to achieve. The Fifth Wall does manage to force the viewer to focus on the unpleasant screeching sounds and elaborate, dark imagery. However, this quality is subordinated by Kutin and Kindlinger’s use of narrative titles because they deter the focus from the viewer’s strictly sensory reaction to the Wall.

Alexandre Larose, a Spotlight guest of VIS, with a background in music production, mentioned a theory that there are two polar opposites to listening and creating music. One is an oral, and the other, a visual approach in which sound is described with imagery. Kutin and Kindlinger have a background in sound design but they do not seem to think about their work in visual terms. For this reason the message they are trying to convey ‒ the implications of the digital revolution ‒  simply does not reach the audience.